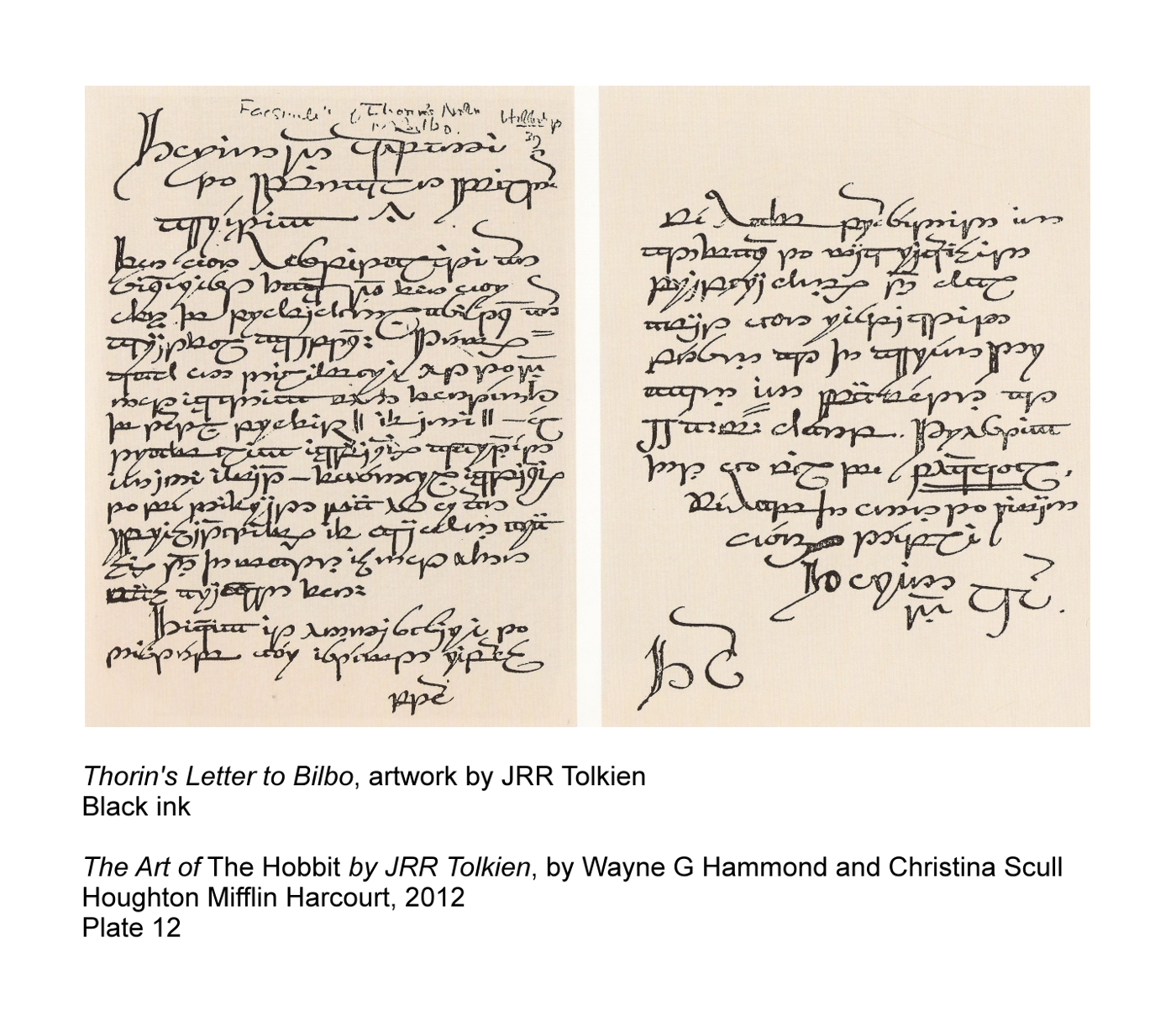 I’ve been having a bit of a muse this morning regarding Bilbo’s burglarious services to Thorin & Co. I’m not a legal expert, but I’d be interested to hear other people’s thoughts:

One of Bilbo’s protestations is the vast extent of the treasure when measured against the efforts of one small hobbit burglar:

“…you cannot pretend that you ever made the vast extent of [your grandfather’s] wealth clear to me. I should want hundreds of years to bring it all up, if I was fifty times as big, and Smaug as tame as a rabbit.” [The Hobbit, Ch. XII, ‘Inside Information’]

However, Bilbo was not hired as a thief, but as a burglar. It seems a small thing, but it may not necessarily a matter of mere semantics (especially when considering Tolkien’s reputation for careful word-choice).

The OED defines burglary as:

[noun]
(pl. burglaries)
illegal entry of a building with intent to commit a crime, especially theft

“Especially” but certainly not limited to theft. The emphasis is on the breaking-in for criminal purposes.

So what were the expectations of Burglar Bilbo? Let’s look at the contract:

“Thorin and Company to Burglar Bilbo greeting! For your hospitality our sincerest thanks, and for your offer of professional assistance our grateful acceptance. Terms: cash on delivery, up to and not exceeding one fourteenth of total profits (if any); all travelling expenses guaranteed in any event; funeral expenses to be defrayed by us or our representatives, if occasion arises and the matter is not otherwise arranged for.”
[etc.]
Thorin & Co. 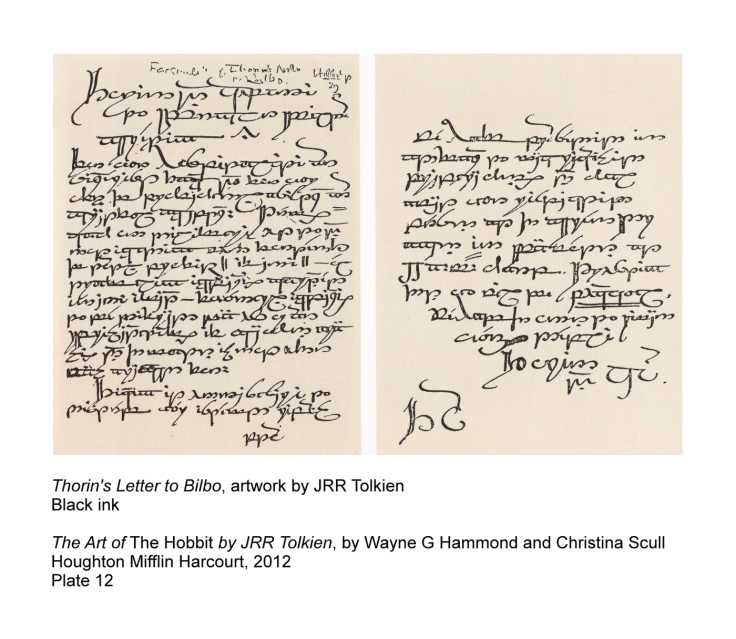 The contract itself merely identifies Bilbo as a burglar and accepts his services in exchange for monetary compensation.

Clearly, Bilbo will be paid in cash for his services in the event that any profit is made. The qualifiers “up to but not exceeding” and “if any” makes very clear that if there is any profit then Bilbo will be paid, and it may be (but is not guaranteed to be) equal to 1/14th of the profits. For example, if, for some reason, only a portion of the treasure is recovered (perhaps it has gone missing or has been consumed or any number of wild possibilities), then Bilbo’s share may be accordingly reduced so that Thorin & Co. get more.

But is Bilbo being asked to actually deliver the treasure? The sticking point is that very first term of the contract. Does “cash on delivery” mean “delivery of the treasure/profit” or “delivery of professional assistance” only? One might argue the latter.

Every person who in the night —

Of course, we are talking about British law here, and not “Shire Law” or anything of the sort. Still, it would make sense to look to the laws as they existed at the time Tolkien actually wrote the book. Note that no mention is made of “theft” explicitly.

When outlining the “plan” (such as it is) in Bag End during the “Unexpected Party”, Gloin addresses burglary briefly and puts it thusly:

“[T]here is a mark on this door–the usual one in the trade, or used to be. ‘Burglar wants a good job, plenty of Excitement and reasonable Reward’, that’s how it is usually read. You can say ‘Expert Treasure-hunter’ instead of ‘Burglar’ if you like. Some of them do. It’s all the same to us.” [The Hobbit, Ch. I, ‘An Unexpected Party]

Gandalf further says of the suggestion to go in by the front door,

“That would be no good,” said the wizard. “not without a mighty Warrior, even a Hero. I tried to find one; but warriors are busy fighting one another in distant lands, and in this neighbourhood heroes are scarce, or simply not to be found. Swords in these parts are mostly blunt, and axes are used for trees, and shields as cradles or dish-covers; and dragons are comfortably far-off (and therefore legendary). That is why I settled on ‘burglary’–especially when I remembered the existence of a Side-door. And here is our little Bilbo Baggins, ‘the’ burglar, the chosen and selected burglar.” [ibid.]

No mention of ‘theft’. Merely ‘burglary’.

Even on the doorstep itself, Thorin does not ask Bilbo to actually steal anything:

One thing which works against Bilbo are Bilbo’s own words just prior to the ones I’ve already cited above:

“What else do you suppose a burglar is to do?” asked Bilbo angrily. “I was not engaged to kill dragons, that is warrior’s work, but to steal treasure. I made the best beginning I could. Did you expect me to trot back with the whole hoard of Thror on my back?” [ibid., emphasis mine]

By this, we could say that Bilbo believed his “professional assistance” was to include theft. Therefore it could be argued that he believed “this is what he signed up for” (having admitted it) and it could be legally binding. Yet, note again that nobody has actually asked him to steal anything. Could it be that only Bilbo ever expected that he had to actually steal anything? It would go a long way to explaining what many have complained of with regards to Thorin & Co. over the years. Namely, what on Earth were they planning on doing when they got there?

Surely Gandalf couldn’t have expected Bilbo to steal all the treasure himself. Nor could Thorin & Co. Are they really so dim?

I would say: no. Of course not. They needed a burglar to “break in”. They would then find out if the dragon was still in-situ and/or alive. Only then would they know “if any” profits would be forthcoming.

Update: I’ve now read “Plot Notes B” (PNB) and Rateliff’s commentary on it in HotH. Some interesting notes:
• In PNB, Bilbo steals not just one but two cups and a “jem”, and the dwarves steal a bunch of gold before the dragon flies off to Lake Town in wrath.
• Bilbo is offered the “Jem of Girion” [Arkenstone] by the dwarves as his payment. But “Bilbo must earn his reward.” … whereupon he slays Smaug.