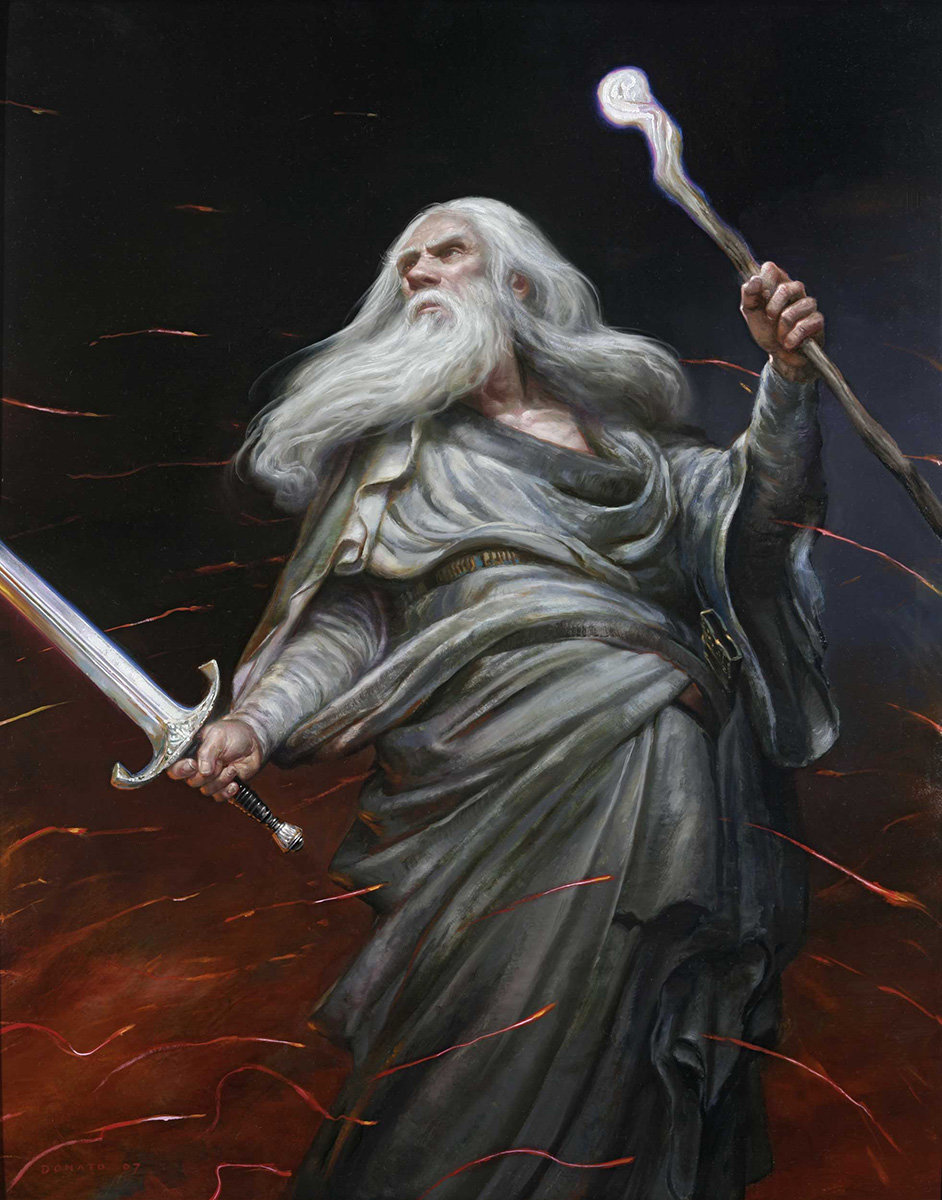 The long-bemoaned change from text-to-screen is more than a simple matter of book nerds being … well … book nerds. The two terms are not equivalent in any way. Let’s begin with the passage in question:

‘You cannot pass,’he said. The orcs stood still, and a dead silence fell. ‘I am a servant of the Secret Fire, wielder of the flame of Anor. You cannot pass. The dark fire will not avail you, flame of Udûn. Go back to the Shadow! You cannot pass.’
The Balrog made no answer. The fire in it seemed to die, but the darkness grew. It stepped forward slowly on to the bridge, and suddenly it drew itself up to a great height, and its wings were spread from wall to wall; but still Gandalf could be seen, glimmering in the gloom; he seemed small, and altogether alone: grey and bent, like a wizened tree before the onset of a storm.
From out of the shadow a red sword leaped flaming.
Glamdring glittered white in answer.
There was a ringing clash and a stab of white fire. The Balrog fell back, and its sword flew up in molten fragments. The wizard swayed on the bridge, stepped back a pace, and then again stood still.
‘You cannot pass!’ he said.
With a bound the Balrog leaped full upon the bridge.
[LotR, ii, Chapter 5, ‘The Bridge of Khazad-dûm’]

Now let’s take a look at the meanings of the words:

can
verb
modal verb: can; modal verb: could
1. be able to.
“they can run fast”
2. be permitted to.
“you can use the phone if you want to”
3. used to request someone to do something.
“can you open the window?”

not
adverb: not
1. used with an auxiliary verb or ‘be’ to form the negative.
“he would not say”

It’s not simple to find a ‘definition’ of cannot, since they tend to point you back to can not, which is two word lookups and then associating the two together for a new, third meaning (see above). But for the sake of clarity, the below is offered, taken from http://grammarist.com

Taking the above in-hand, what is Gandalf likely saying when he tells the Balrog (no fewer than four times) that he [the Balrog], cannot pass?

Both the first and second entries seem plausible. In the first, we need to first determine what Gandalf would mean if he implies ability. The Balrog, surely, has the physical ability to cross the bridge: he has legs; he can walk; he even “leaped full upon the bridge”. The only thing standing between him and the other side is Gandalf. Had Gandalf not been there, then theoretically, the Balrog would have the ability to carry on over the bridge, if he so chose. Therefore, if we take the first entry to be our guide, Gandalf must be implying that the Balrog has not the ability to circumvent the blockade that he [Gandalf] has created.

Let’s look at shall not.

shall
auxiliary verb;
1. plan to, intend to, or expect to:
I shall go later.
2. will have to, is determined to, or definitely will:
You shall do it. He shall do it.
3. (in laws, directives, etc.) must; is or are obliged to:
The meetings of the council shall be public.
4. (used interrogatively in questions, often in invitations):
Shall we go?

Again, taking them each in-hand, what are we left with? What is “Film Gandalf” saying?

The first entry (1) defines an intention [“You do not intend to pass!”]; this seems unlikely to be Gandalf’s intended message; the second (2) defines a requirement or determination [“You will not pass!”]; this seems most likely to marry up with Gandalf’s intent; the third (3) defines a legal requirement [“It is illegal for you to pass!”]; we can safely throw this out since Gandalf is clearly not setting some legal boundary for the Balrog, despite the fact that it could be argued that he [the Balrog] is tresspassing; the fourth (4) defines a question which, again, I think we can all agree to scrub.

It is also worth looking at where one may use will vs shall:
https://blog.oxforddictionaries.com/2013/09/25/will-versus-shall/

I’d like to draw your attention to the section on Determination or duty: you shall go to the ball!

Returning to our fairy godmother, her statement to Cinderella neatly illustrates the other main use of shall and will: to express a strong feeling that something must definitely happen, or that someone must do something as a duty. In a complete turnaround, traditional grammar dictates that I and we should be accompanied by will in such situations, whereas shall is used with you, he, she, it, and they:

I will ensure that every single cent is spent on the project for which it was intended.
We won’t put up with this situation any longer!
You shall not leave the house after 9pm.

If we take the first example given, that “shall” and “will” are used to express a strong feeling that something must definitely happen”, then film Gandalf is telling the Balrog that he [the Balrog] definitely is not going to pass in the future. This is arguably impressive in its own way, as it shows a certain foresight on Gandalf’s part. But it is not the same thing as cannot.

If we take the second example given, that “shall” and “will” are used to express a strong feeling that someone must do something as a duty, then we are out in left-field. Film Gandalf is clearly not telling the Balrog that it is his [the Balrog’s] duty to not pass.

This seems to leave us with the following summary:

Your mileage may vary. But for my money, cannot is (in either example) far more badass.

3 thoughts on “Cannot vs Shall Not”