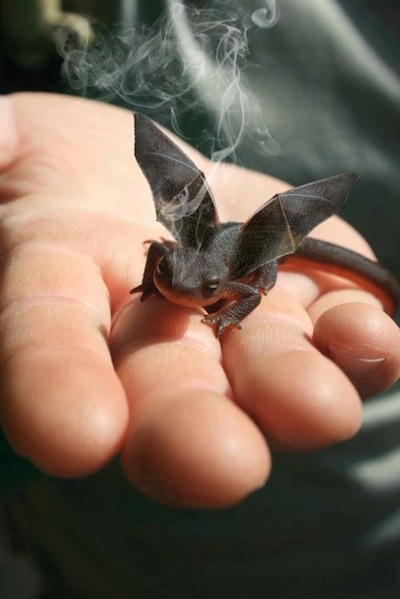 Along with ‘do balrogs have wings (no), who was Tom Bombadil (nobody knows), and why didn’t they just use the Eagles (let’s not even start that one), one of the most common questions in Tolkien studies is How big was Ancalagon the Black?

(This answer will attempt to avoid speculation. This may displease some.)

Like most Tolkien enthusiasts, I’ve thought about this question quite a bit over the years and given my opinion about it more than a few times. Now that I dabble in this blog, it seems like a perfect place to set down my thoughts for quick reference in the future.

To answer the question quite simply, we do not know how big Ancalagon was. Here’s why:

In the whole of the legendarium, we have precisely two mentions of Ancalagon the Black. The first, and primary citation which most people seem to give when referencing his enormous size is this one:

Before the rising of the sun Eärendil slew Ancalagon the Black, the mightiest of the dragon-host, and cast him from the sky; and he fell upon the towers of Thangorodrim, and they were broken in his ruin. [The Silmarillion, Chapter 24, “Of the Voyage of Eärendil and the War of Wrath”; emphasis mine.]

Second, we have a quotation from Gandalf:

“It has been said that dragon-fire could melt and consume the Rings of Power, but there is not now any dragon left on earth in which the old fire is hot enough; nor was there ever any dragon, not even Ancalagon the Black, who could have harmed the One Ring, the Ruling Ring, for that was made by Sauron himself.” [ The Lord of the Rings, Book One, Chapter II: “The Shadow of the Past”; emphasis mine.]

Let’s take this second citation first so as to eliminate it as being worthwhile for the question at-hand (a question of size).

In what context is Gandalf referring to Ancalagon in this second citation? Gandalf sets Ancalagon apart (nor was there ever any dragon). Gandalf’s statement is pretty solidly all-inclusive of all dragons ever. And by saying “not even Ancalagon”, he is clearly setting Ancalagon’s might in this context above all other dragons.

But what is the context in which Gandalf is speaking of Ancalagon? He is doing so from the context of heat and fire and its ability to melt a Ring of Power (specifically, The One Ring).

From Gandalf’s words, we can surmise that Ancalagon’s old fire was hotter than any other dragon ever. But this is not sufficient to say anything else, especially with regards to his size.

We can, therefore, eliminate this citation as being of any use to answer the question at-hand.

As to the first citation, the key takeaway elements seem to be:

It is worth noting first that might is itself a subjective term. Ancalagon was mightiest in what way? Was he largest? Strongest? Did he have the greatest “magic” (for lack of better term; think of the ‘spell’ which Glaurung placed upon Nienor, or his ability to paralyse Túrin with his gaze)? Was he “mightiest” in all ways? We have nothing to offer clarity.

It’s also worth taking a brief pause to consider the term dragon-host (of which Ancalagon was mightiest). There is speculation with regards to whether a host in any given context throughout the legendarium refers to a specific military grouping or to a general, all-inclusive grouping (e.g. a race). The term dragon-host, therefore, could mean either the dragons of Morgoth present in the War of Wrath, or it could refer to all dragons. Again, speculation. For more info on this, see here.

This all being taken as read, Ancalagon was unquestionably mighty and clearly noteworthy. But we are no closer to discerning his size, which is what this question truly seeks to answer.

…and remote account of the end of the First Age, when Thangorodrim was broken and Morgoth overthrown; [The Silmarillion, “Foreward”]

And [Morgoth] being freed gathered again all his servants that he could find, and came to the ruins of Angband. There he delved anew his vast vaults and dungeons, and above their gates he reared the threefold peaks of Thangorodrim, and a great reek of dark smoke was ever wreathed about them. [ibid, Ch. 9, “Of the Flight of the Noldor”]

But Morgoth, as has before been told, returned to Angband, and built it anew, and above its doors he reared the reeking towers of Thangorodrim; [ibid., Ch. 10, “Of the Sindar”]

…with his last sight [Fëanor] beheld far off the peaks of Thangorodrim, mightiest of the towers of Middle-earth… [ibid., Ch. 13, “Of the Return of the Nodor”]

Beneath Ered Engrin [Morgoth] made a great tunnel, which issued south of the mountains; and there he made a mighty gate. But above this gate, and behind it even to the mountains, he piled the thunderous towers of Thangorodrim, that were made of the ash and slag of his subterranean furnaces, and the vast refuse of his tunnellings. They were black and desolate and exceedingly lofty; and smoke issued from their tops, dark and foul upon the northing sky. [ibid. Ch. 14, “Of Beleriand and its Realms”

There are other references to Thangorodrim, but this should do to be getting on with. We begin with a reference to Thangorodrim in the Foreward, in which it is described as being broken. Nothing at all is said of towers or of peaks.

We then have other references which mention towers, peaks, or both. On the one hand, we could assume Thangorodrim was itself three mountain peaks, and that towers is used merely in metaphor. On the other hand, we could argue that Thangorodrim was merely the towers made of ash, slag, and refuse from Morgoth’s tunnelling beneath the actual mountains of Ered Engrin, behind which and to which Morgoth built the towers.

Your interpretation may vary. What is not in question is that the towers were high; exceedingly so. They were highest of all the towers of Middle-earth. Still, what of that? Does that tell us anything about Ancalagons’ size? Well, no. At least, not yet.

The towers of Thangorodrim were broken. What does that mean? Does broken mean damaged? Does it mean destroyed? We don’t know specifics. The author does not tell us. What we know is that these towers which seemingly meant something to Morgoth (for he took such efforts to pile them so high) seem to have come to some form of an end.

So what we’re really asking is: is there any way to estimate the size of Ancalagon based solely off the fact that he vaguely broke three towers, the ultimate design and size of which are unknown (but the construction of which consisted of the piling of ash, slag, and rubble), never mind the fact that he was cast upon them from the sky by a being wielding one of the three most powerful items known in existence in all of Arda (one of the Silmarils)?

The answer is: no. We can merely speculate. Speculation is fun, but it doesn’t get us facts. As ever, I am keen to learn more. So if you think I’ve missed something, please let me know!

2 thoughts on “Behold the Dragon of Enormous Girth, Who Smashed Up Some Towers on Middle-earth”