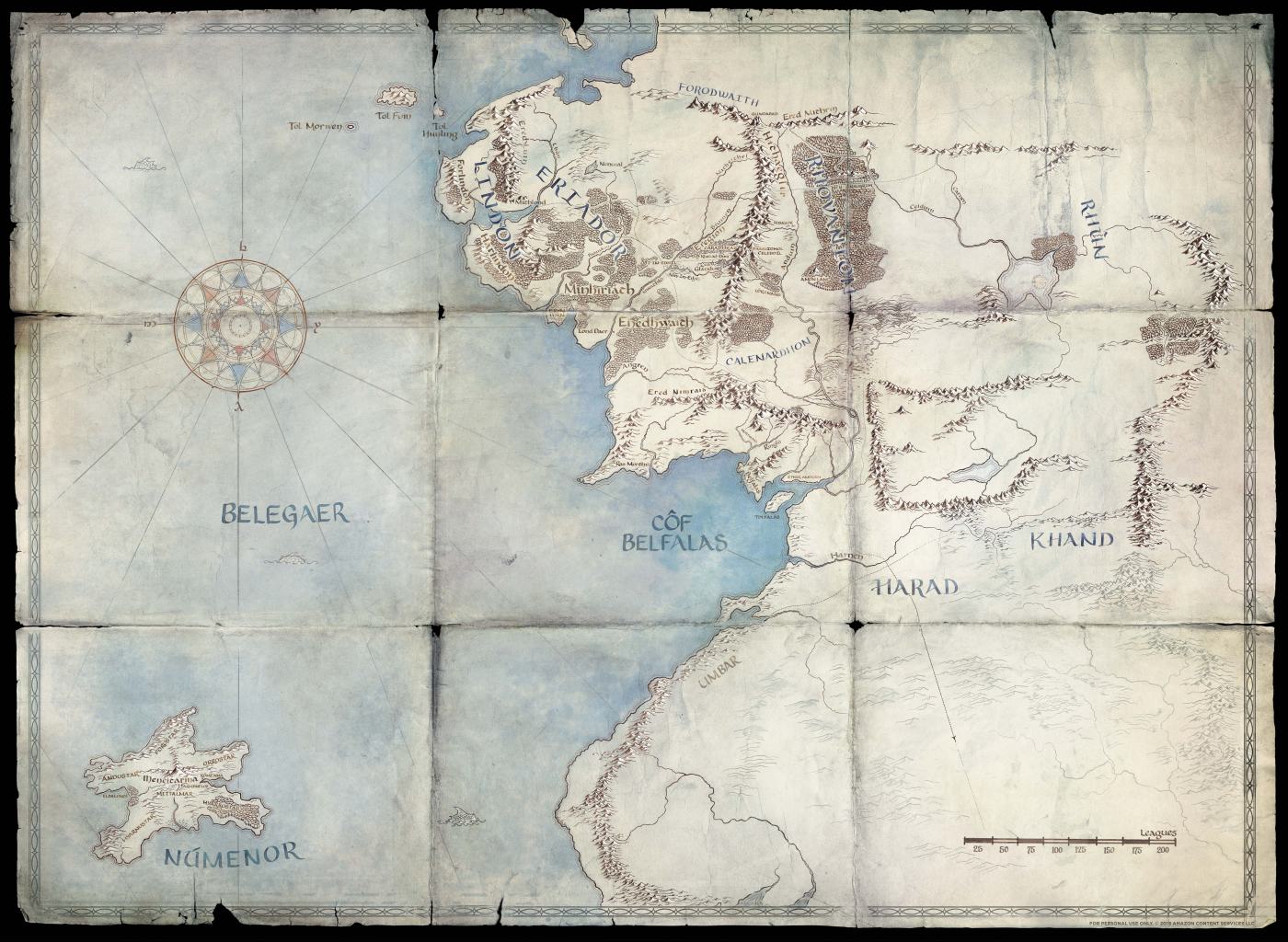 Unless you’ve been living under a rock (or perhaps underhill) for the past six months, you’ll know that Amazon are producing a “Lord of the Rings” TV series due to air on their Prime streaming service, and their social media marketing is in full-swing. Taking a page from Tolkien, they wisely started with a map. In a series of tweets, Amazon populated their map with place-names and if you pay attention, these offer hints at when the action will take place (if not necessarily what that action might be). Indeed, their (hitherto) final map (seen above) included the two biggest giveaways: the Isle of Númenor and the tag, Welcome to the Second Age.

In this series I hope to explore that period of time in Middle-earth. I may make some predictions at what may be forthcoming in the Amazon series, but at this juncture I intend to merely focus on offering a glimpse at what we actually know about the Second Age and highlight sources for such information for those interested in delving deeper. If it’s not yet clear, this series will be rife spoilers for the written works of J.R.R. Tolkien and, by consequence, potential spoilers for the Amazon series as well.

In this first post, we’ll begin with some basic terminology.

What is an Age in Middle-earth terms? An Age is simply a span of years. In terms of Tolkien’s Legendarium, there are four: the First (FA), Second (SA), Third (TA), and Fourth (4A) Ages. The adventures of Bilbo, Frodo, and their companions take place during TA. However, it’s worth mentioning at this time that (if you didn’t already know it) Tolkien intended the world of his creation to actually be our ancient world. That is, Middle-earth is our world, but during ancient days. In a letter to Rhona Beare in 1958, Tolkien said: ‘…we are now at the end of the Fifth Age, if Ages were of about the same length as S.A. and T.A. But they have, I think, quickened; and I imagine we are actually at the end of the Sixth Age, or in the Seventh.’¹

How long does an Age last? There is no set duration for an Age. They are incremented after major events. For example, TA is held to have ended and 4A begun when the Three Elven Rings passed into the West (along with Bilbo, Frodo, Galadriel, Elrond, Gandalf, et al). By that point, the TA was in September of its 3021st year. The destruction of the One Ring had taken place more than two years prior, on the 25th of March, TA3019. You may think of the separation of ages as approximately akin to BC/AD in the “Before Christ/After [Christ’s] Death” sense. Except that each new Age begins again with Year 1 (whereas in BC (or BCE) we count backward from 0).

What was the Second Age? That’s what we’ll explore in this series. But as you can already tell, most of the characters you may be familiar with from TH or LotR will not have a hope of being seen. We don’t yet know how much of SA the Amazon series will explore, but you can bet your brass-buttoned waistcoat that the mortal men (and by extension the hobbits, as they are part of the race of men) that you know and love won’t be around more than three thousand years prior. Aragorn was long-lived. But even that has its limits. Still, there is room for familiarity. Elves are, after all, ‘immortal’. So don’t be surprised if you see the likes of Elrond, Galadriel, or Gil-galad cropping up (in fact, you should be surprised if they do not).

Find the entirety of our Second Age Exploratory Series here.